History of the Grand Prix Region

The Grand Prix Region was started by two former Los Angeles Region members, Tore Johnson and Ron Ramage. The two were dissatisfied with the lack of Track and Rally events in the LA Region, so in the late 70’s they decided to strike out and form a Porsche Club of competitive members. The estimated start date was about 1977 or 1978. Tore Johnson and others lived in Long Beach so naturally the meeting were held in the Long Beach area.

Tore Johnson and and 5 other members needed to come up with a name for their new Region. The Long Beach Grand Prix had started in 1975 as a Formula 500 race on the streets of downtown Long Beach, so the Grand Prix Region was selected as the new name.

Tore petitioned Porsche Club of America (PCA) to start an expansion Region, but was denied because the minimum number for membership was not met. Tore began his campaign to recruit new members. He wanted members that would be active in the club so he was very selective. He had to convince new perspective members that this was the right thing to do, and that they would enjoy this club better. Eventually the numbers for a new region was met.

The meeting places at that time was a pizza restaurant (name to be identified) in Long Beach with 14 members attending. The Reef in 1984. Chart House, and the Glider End.

Rally Events — The new club did a lot of Rallies as Ron Ramage was good at putting them together.

GPX Logo — The original GPX Logo was from a picture of Ron Ramage’s 550 Spyder.

New President — When club attendance started to fall, the membership asked member Skip Carter to be President. Skip had previously been a member and president of the San Diego Region. 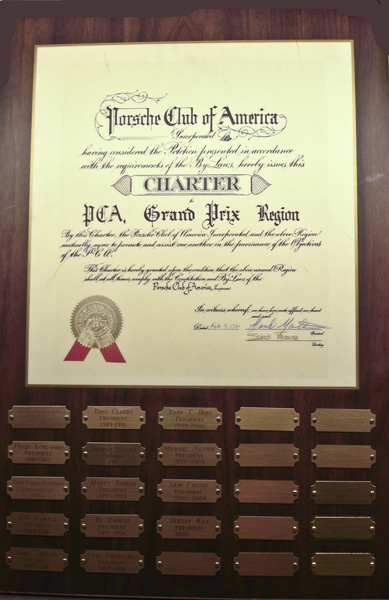 Join the Club. Join the Fun!

To see what events we have planned, check out the GPX Events Calendar. Join us at an event or two…and join in on the fun! “It’s Not Just the Cars, It’s the People.”

See What You Missed

If you weren’t able to join us at a recent Grand Prix Region event…see what you missed by checking out our Flickr account.